In the event you were wondering...

I however wanted to recount the individuals involved if there were any other than myself that put a large effort into the end product. They I would like to remember.

Definitely more so than the EOL Applications, Projects & Publications themselves. It has been rare that I have been assisted by those that volunteer, so I don't take it lightly given my experience of the few that did so directly or indirectly vs. the 100's that never followed through. I've always been fair in my dealings with those that have followed through to assist me in bringing to market products that assist the E&P Players community at large.

I have a solid line group that was established for GuiLDWare and it is one of the 'places to be' when it comes to new hero releases. There is always great chat and debate about the heroes leading up to release as there are several BETA Testers amongst us and many studious players who research who is coming out in the future. One of the best things is there is a solid group of Players who Max the new hero(s) the day it is released (often within the hour) and test it. They give a good insight into usability from their perspective.

So now into the Origin! With the release of Seshat, things got wild. I had screenshotted some comments from Anetho and CherryChickadee in the group chat. I had also gotten some information via a DM from Ender. I already had established a "FIRST-LOOK" preview of heroes based on their card values running a ranking build (RaZoRs-EDge) and how the results affected the Meta. This is the only utility or data that gives the players community an exact idea of ranking by factual card values when new heros are added (Power, Defense, Attack & Health). Ap & Dh I'm NOT including in that please notice. The thought came to me that if I could bind facts with with some excellent and respected players opinions or better yet their Early Experience in using the Heroes themselves - it could really help the players!

ACE Review: How it all began.

I briefed with each of them individually and asked permission to use their public comments in a publication which was gladly met with agreement by all. My original idea was for it to be a short teaser in a comic strip format that I could attach to the bottom of my Razors-EDge first Look publication. I messed around with it for a bit then visually I found what I wanted to do with it. I wanted to reward the contributors somehow, so the comic book not only got a visual representation of each of them the publication was derived from their names! Which turned out perfect for me. 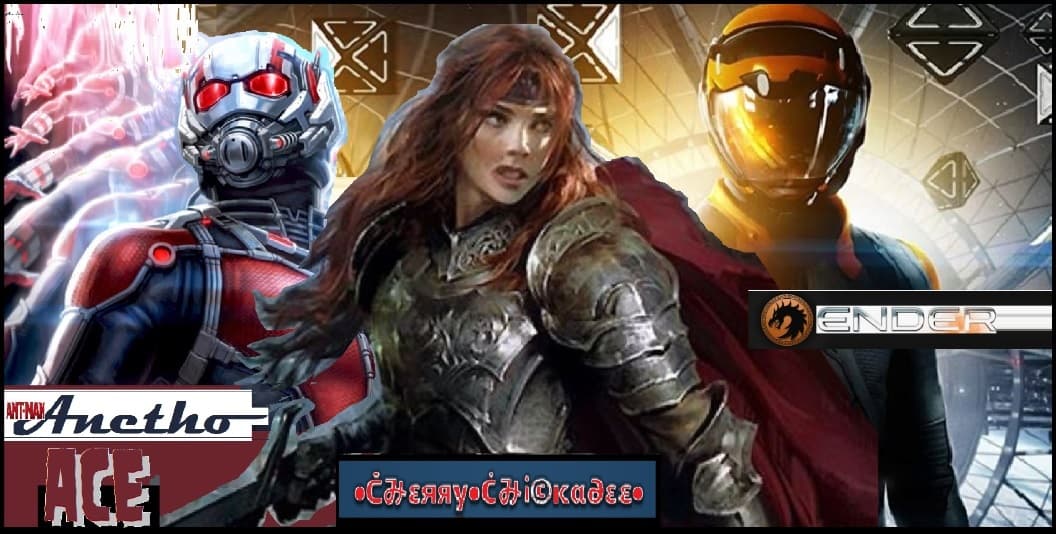 I was extremely pleased with the visuals I had assembled the characters as well to represent each of the ACE's! The publication went well. I felt there was enough value in it that I would creat a LINE Group specifically and add them into it and get everyone on the same page if this was a relationship we could establish between us on behalf of the players community to provide the early account of viability. Buy in was unanimous.

Seshat vol #1
At the time this heavy visual was used to answer the questions that covered its face. I was really into how it turned out.
Miki vol #2
Went well! The amount of information that was provided had me trash the comic strip idea! This review/publication established the format moving forward.
Grazul vol #3
This review was a hit and the publication was getting some momentum now in terms of interest in the spaces I was occupying. Grazul was the most passed around flyer/review of the bunch.
Kingston vol #4
Great feedback on the review.
Neith vol #5
With the Nerf talk from BETA this one wasn not getting a lot of hype. Cherry didn't have interest in obtaining this hero, so I knew I needed to find a backup as it was known to have 3 perspective of experience. I brought in a modified version of Wormwoods review (he write reviews in the official forum from time to time). I also got approval from Peter who was assisting with the RiSe of tHe BaTs (at Batman Returns) to include comments I had captured in Alliance chat. Interestingly Neith seemed to get more activity in the first hour than I remember for most in the past. Ender and D-Z (Deezy), Wormwood had her full and in the leaderboard as I recall at record speed.

Somewhere in-between these 2 I integrated the ACE-Review into the Hero Utility, so that the reviews would meet with that audience as well.

Grimble - Skipped due to no interest (and I tried hard to find 3 reviewers)
No one had enough interest in the hero to level him even to 3/70! I had zero interest in leveling him either LOL. I figured I would need to get guests for the review and there were no eager takers and I had to accept this one wouldn't get one.

Vela - Skipped due to lack of time
I don't even really remember all that was discussed here or who may have provided review information (I just know there weren't 3). I was heavy into studying various questions through data analysis I had with Alliance Score while I lead BATMAN Returns to the top of the Leaderboard. BaTs!

Jean-Francois - Skipped due to lack of time
Anetho provided the most detailed and in-depth experience review to date (posted directly into the TM Players GuiLD Chat)! I captured it for later. I was so busy building the BAT FAMILY community, infrastructure and ramping up the 3rd competitive team that I didn't push to get anything from Ender or Cherry.

In not staying on top of things as the organizer I played a large role in the publication being shut down. My growth with BATMAN was my focus and the momentum I had established required me to shut this down along with the GuiLDScore Grading BETA project and the DRaGoN-CoVe Hero Properties project (which though this was integrated into the GuiLDWare platform - something was released similar to it so I didn’t see the point in continuing). It has a very small use still in BaT-CoVe.

This was perhaps the 4th full scale attempt to provide the community with a viable alternative to a grading system that would remain active and accurate for the Current Meta. I personally really didn't want to get into GRADES, however it what was established before me and the community liked having them. A fair uproar occured when Anchor left E&P. I stepped up with a 90 player team that was part of my GuiLDWare team. Our focus was to define and I would develop an alternative system which made improvements on his. To test the ability of having the community who owned the heroes maxed for some period of time as the graders seemed to be a wonderful idea. At that time I established a test system using the categories and sub category grading components Anchor had identified as being used in his. The review team was assembled after a couple weeks run as I recall. The trial run results were all over the place! As well some of the players were not confident in being graders in my follow up so much so that several left after the experience.

We established that the system had some fairly large holes in it, and was completely subjective. We went back to the drawing board. I separated the TECH team, the Consultants team and the GuiLDWare standard team from each other at that point moving forward. Several ideas came out of the brainstorming by the Tech team. I sat in on the TECH team brainstorming sessions for short periods and had selected a Mathematician from the Forum to lead/oversee it (who would go rogue on me before they would produce anything in forms of a calculation or documentation to work from). The time that was spent without anything being physically produced from them (Detail Design, Requirement specifications, etc.) required me to hault the effort. Following was my final document presented to the team.

My core team consisted of the following players when I shut down the project. This exact text and update to the standard team remained in GuiLDWare when it was released to the users community:
5/5/2019 UPDATE: TM's P.G. GRADING TECH-TEAM and Consultants I believe have come to a decision point and potential agreement. As I understand TITANS will be the only section of the grading process that will actually warrent LETTER GRADES. War, Raid Offense and Raid Defense will be graded using a scale, NOT a letter grade. More will be revealed soon. 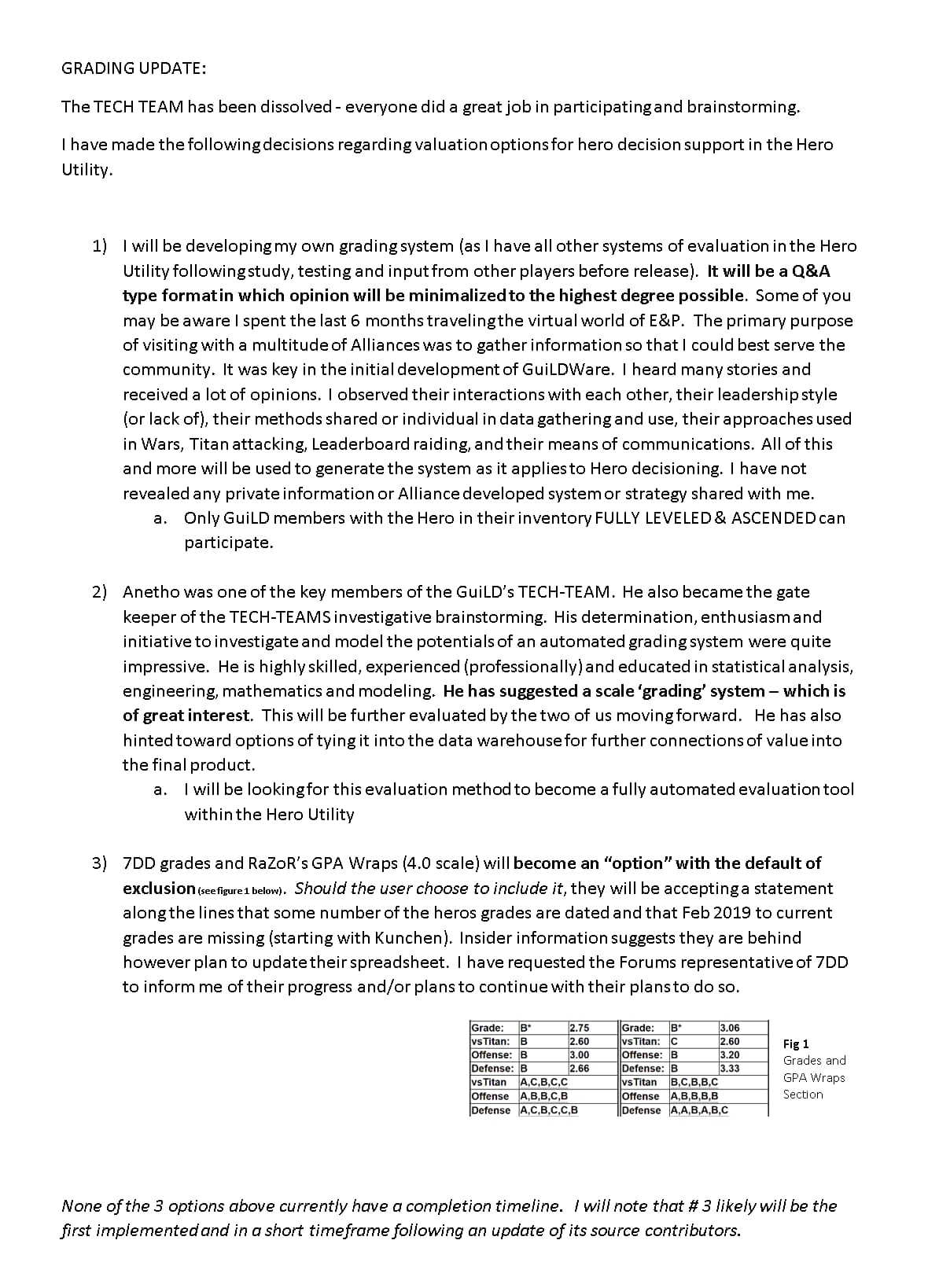 We would all (most of us) actually stay together for sometime during my coding efforts of GuiLDWare. I finally left the group as I felt I would be much better off doing the work on my own wihtout being questioned by a group regularly. Honestly outside of the talk that was often completely unrelated to the work I was doing, they weren't didn't do much if anything that was getting me to where I needed to go to get it done. Several we willing to test and that was helpful, that was not a consistent need.

A couple different attempts were made after that original team was shut down due to time to market issues. My teams thereafter would never reach the double digits again. Members of those teams were primarily the ideal members of the first.

Anetho had proven his value as an intelligent agent - which was not surprising being he was an engineer in the O&G industry. Lott was always sharp with ideas and in providing information. Ender had been with me from the start and always supported my efforts.

After the public announcement that 7DD was going to pickup the Grading process and keep it current after a drought of the doing so after the first time failed and my attempts to work with some of the individuals from their Council for a solid date to get it done, I found myself in a position that I was going to just pull their grades out of the utility. For time to market reasons i modified the scale of the test system and added in the automation of each of the OVERALL grade to minimize users trying to manipulate the sub categories to infulence the overall grade into what them to be. So minimize the subjective nature of the model somewhat. I found quickly that the attack Multipliers (Miki, Tarlak, Ranvir and Wu-Kong) DID NOT fit into the model working through it one evening with Wormwood had returned to assist after a long absence.

The last assembled team included uclapack. However we (those mentioned here) never got past the very minor discussions where it included uclapack who agreed with a pairing system and some other ideas that were brought to the table. I had at one point attempted to modify the Hero Utility based on a mach-up provided by Lott that I think we all agreed on. It just didn't work well without have to consider a complete rewrite so I had to table it.

The end of this story resulted with Anchor returning, he was busy while he was gone setting himself up for his re-entry into E&P as the communities premier grader. He reached out to me directly asking me to include his updated grades in the Hero Utility which I was more than happy to do. I was given access to his modified excel spreadsheet. I also joined his LINE pay membership for his Anchor Cove product line which included cute coffee mugs and t-shirts. LOL. What was odd was that I already had 2 products in production (privately) on the market using CoVe! What are the odds. DRaGoN-CoVe and BaT-CoVe.